Too busy to be healthy? Download my free e-book

Get my favorite quick and easy recipes straight to your inbox! All recipes are gluten, dairy and soy free, paleo and AIP adaptable.

I have always struggled with a lot of sickness during my childhood, and it took me many years and a lot of suffering to finally figure out that there was a connection between the foods I was eating and my health problems. In 2013 I was diagnosed with an autoimmune disease – rheumatoid arthritis. It took me another two years to finally pick myself up, take my health into my own hands, and radically change my diet and lifestyle. I started following the autoimmune protocol (AIP) – a nutrient-dense anti-inflammatory diet that completely changed my life.

But let’s back up for a little bit because this autoimmune disease did not happen overnight. Knowing what I know today, there were a lot of warning signs early on and I believe a lot of things could have been prevented. I don’t believe that I am the slave of my genes anymore and that this all just happened to me. But there were many many years were I felt like a victim and that my body was failing me. I am sharing my story because I wish I knew what I know today and if sharing my story spares one person from going through what I went through it is worth it.

As a very young child I had a lot of severe ear infections that supposedly required antibiotics. Hence my life started very early on with many rounds of antibiotics. Although they can be a life saving drug (I definitely think that there is a time and place for the use of antibiotics) I am convinced that I received way too much of it without taking any probiotics to rebuild my gut flora. I also wonder if there weren’t other ways to solve the problems and if food intolerances possibly were an issue already back then.

My journey continued with a couple of years of constantly getting scarlet fever, a very common childhood disease in Germany. I remember one year in particular where I had it 7 times in a row, and you guessed right antibiotics were given every single time. Fast forward to my teens, I would get really bad sinus infections and bronchitis about twice a year…and of course antibiotics. I didn’t really consider myself a sick child because I was fine the rest of the year. Even though at some point I was put on asthma medication because of a chronic cough and some trouble breathing when I was exercising.

During my early twenties my health completely crashed for the first time and even though I was only diagnosed with food intolerances, intestinal permeability and candida, that experience was actually worse than my autoimmune disease diagnosis. Probably because it took 2 years to even get some type of diagnosis. I was 19 when it started and was pretty much constantly sick for 2 years straight. My symptoms were flu like and affected my upper respiratory system, so I pretty much had a fever, bronchitis and severe sinus infections for 2 years straight. And then random weird symptoms would pop up out of nowhere, like numbness in my face and legs. As soon as I would recover from something, something else would pop up. I thought I was cursed. Trying to navigate the health care system was so incredibly frustrating for me and my family. I felt like a guinea pig running from doctor to doctor, trying everything conventional medicine had to offer at the time. Of course more antibiotics, thyroid hormones and lots of other “fun” stuff. When that didn’t help I turned to alternative medicine. I am not going into detail about all the things I have tried, but let me tell you, some of it was wild. It’s kind of funny looking back, but trust me it was far from funny at the time. When that didn’t help either I went to therapy because clearly everyone thought it was in my head. I am not trying to say that any of the treatments I tried won’t work for others and that therapy wasn’t necessary for me, but I always knew that there was something more to it even though my blood work always came back “normal”. I remember getting really angry at my therapist once defending myself by telling her “how can this all be in my head if I am sneezing and coughing up green mucus?” (I know… gross).

Meanwhile I was trying to live a somewhat normal life, I had moved to Sweden to continue my training to become a professional dancer. I was training and performing with a fever for almost 6 months, pumped full of medicine and painkillers…spending my free time trying to recover from being sick until my body would collapse and I would have to stop dancing for a week and then the cycle would repeat…because I guess life had to continue somehow….and according to western medicine there was nothing wrong with me. After developing pneumonia I had to abort my Sweden experience and move back home to Germany. This happened shortly after I was the guinea pig of yet another try to boost my immune system. I was told that my immune system is weak and cannot fight off viruses and bacteria therefore we needed to slowly get my body used to these. So I had to inject myself weekly with a small dose of viruses and bacteria…yeah…that didn’t go so well. Again if I knew what I know now I would have never put my poor body through all of this.

Its actually really sad because all this time my body was trying to “talk” to me and “tell me” to change something but I didn’t listen..I mean, I didn’t know how to listen or how to interpret it. And meanwhile I felt trapped in a body that didn’t function properly and developed a lot of anger towards it, while bombarding my already compromised gut health with more antibiotics and “happily” munching on foods that my body didn’t tolerate.

So finally after two years of suffering and reaching many lows, where I didn’t really want to continue fighting anymore, I got answers and help. A former dance teacher in Sweden told me it could be something related to food and sent me to a man who practiced holistic health and through him and many others I finally found a doctor in Germany who was able to test all of this. I was diagnosed with intestinal permeability (leaky gut), candida overgrowth and food intolerances to mainly gluten and dairy.

I would have done anything at this point in order to be healthy so changing my diet was very easy for me. I worked with the doctor to repair my gut health and cut out sugar, dairy and gluten and tadaaaa …within a very short time I was feeling good again. After following specific protocols for awhile I was able to stop taking asthma and thyroid medications and I was rarely sick anymore. It was crazy to me how “easy” the fix was. But the more I learned about gut health and the immune system it all made perfect sense.

Spoiler alert, as I already revealed in the first paragraph unfortunately this is not where the story ends. Years later, major stress, unhappiness, and a certain laziness to keep up with this diet that was good for me, plus a lack of knowledge made my health crash again, and I was diagnosed with uveitis and rheumatoid arthritis. But more about that in Part 2.

I am sharing this with you because I wish someone had told me back then. I could have saved myself years of suffering. So don’t ignore the early signs. Autoimmune diseases come on a spectrum and they don’t just happen over night. Many things that we think are normal in our society like allergies, skin problems, digestive problems are not normal and a sign that your body is dealing with something. Looking back, there were so many red flags that I totally ignored..or better said I didn’t have the tools to interpret them. For example. I used to look 6 months pregnant after eating and I thought it was hilarious, #foodbaby. I never put 2 and 2 together, especially because my major symptoms were not related to my gut. So don’t wait until you develop a severe illness to take charge of your health.

Find the right diet that works for you, work with a functional doctor that will get to the root cause of your issues no matter how small they may seem. I truly believe that a lot of my suffering could have been prevented and I hope my story inspires you to take charge of your health. I will leave you with this quote.

“If you listen to your body’s  WHISPERS, you don’t have to hear it SCREAM!” ~unknown 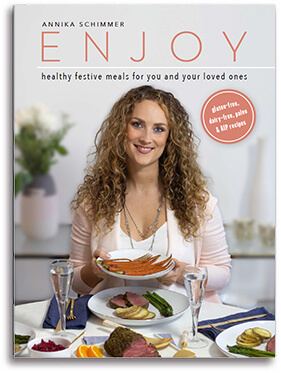